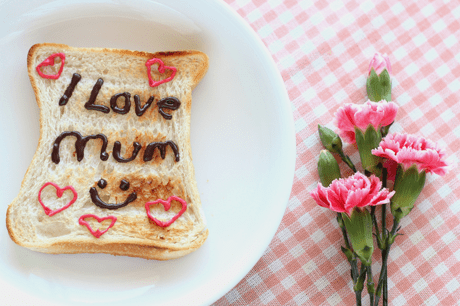 How’s this for a Mother’s Day poem?

Roses are red, violets are blue, and no other mom is as sweet as you.

Okay so we’re not exactly poets… but we think mom will forgive us for our less-than-spectacular poetry skills once she gets a taste of our Mother’s Day breakfast. We have scoured the Food Network’s recipes and found some gourmet, yet easy to make, breakfast faves that your mom will love.

1. Whisk together eggs, chocolate milk, vanilla extract, cinnamon, in a medium bowl, and set aside. Lay out 6 slices of bread on work surface. Top each slice with the hazelnut chocolate spread and sliced bananas. Top with remaining bread slices; press gently to seal the sandwiches.

2. Place sandwiches in a shallow baking dish (or two dishes) large enough to hold them in a single layer. Pour egg mixture over bread, and soak 2 minutes. Carefully turn sandwiches over, and soak until bread is soaked through, about 2 minutes more.

3. Heat 2 tablespoons butter in a large skillet over medium heat. Fry half of the French toast until golden brown, 2 to 3 minutes per side. Garnish with strawberries, shaved chocolate, maple syrup and powered sugar.

1. Wash the spinach and cut off the stems. Spin the excess water out. Drop the spinach into a large pot on the stove to wilt, about 3 minutes. (There will be enough water still clinging to the leaves to steam it.) When the spinach is cooked, drain and plunge into an ice-bath to seize the colour. Squeeze dry in a tea towel. Chop.

2. Heat half the butter in a frying pan and gently sauté the shallot. Add the spinach, and season with salt, pepper, and nutmeg. When hot, turn off the heat and set aside.

3. Put the yolks in a metal bowl and set over a pot of gently simmering water. Season with salt and pepper and whisk until thick and frothy. Remove from the heat. Beat the whites to stiff peaks and fold into the yolk mixture.

4. Heat the remaining butter in a large frying pan for the omelette (no-stick will simplify your life). Pour the egg into it and cook until the bottom is set and golden and the top still fluffy and soft, three to five minutes. Scatter the spinach mixture all over the omelette, then the cheese. Cover for a few minutes to soften the cheese. Uncover, fold the omelette in half and slide it onto a plate. Serve.

2. Cut potatoes in to 1-inch squares and toss in canola oil. Add spices and toss again. Place potatoes in oven for 40 minutes or until soft in center.

3. Slice and dice white onion, sausages and tomatoes. Melt ¼ cup butter in a skillet and add the sausages. Stir on medium heat just until the sausages are cooked through. Add onions and cook for approximately 3 minutes until the onions are transparent. Add tomatoes and turn off heat.

4. Crack eggs a bowl and whisk; add salt and pepper to taste. Melt ¼ cup butter in a skillet, add eggs and scramble till fluffy. Add scrambled eggs and fresh spinach to sausage mixture and cook over a medium heat for a few minutes.

1. Preheat your griddle or a large skillet over medium high heat.

2. In a medium bowl, whisk together the flour, baking powder, sugar and salt. In a separate bowl whisk the buttermilk, eggs, melted butter and vanilla. Switch to a wooden spoon and stir the dry mix into the wet ingredients just to combine. Drop by spoonful on the griddle, watch for bubbles to break the surface and flip. The second side will cook a bit faster! Stack and share.

3. Variation: This basic mixture is ready for personalizing. Stir in ingredients your gang loves, like apples and cinnamon, blueberries and cardamom, banana and chocolate chip or just throw some sprinkles on top. If you’ve got a mixed audience, separate the batter into smaller bowls and do them all!

You may already know, the GreenON Rebates program ended earlier this year, on June 19,...

Save on a New Home Comfort...

Spring is slowly approaching—but many homeowners are still looking to upgrade their...

A1 Air Conditioning and Heating would like to thank all the participants that suggested a...

On November 11th, Canadians will observe two minutes of silence at 11:00 AM to...